When I first started seriously collecting miniatures, I was, like most people, confronted with the problem of trying to store them. I started putting magnetic bases on all of my miniatures with the idea of using a metal toolbox with drawers to store them, but most 25mm and 28mm miniatures are just slightly too tall to fit standing up in the drawers of a typical toolbox, especially once you make them slightly taller by putting a metal base and magnetic backing on their bottom. Metal toolboxes are also pretty heavy, and are made even more so when one loads them up with a bunch of pewter miniatures. Finally, unless one has the foresight to buy one of those stacking sets of toolboxes, they don't really stack very well, and as a result, still take up a lot of space.

Despite all of these issues, I was resigned to storing my miniatures this way until I found a collection of supplies that provided an alternative solution. Like most solutions for gamers, this one was made by combining things that were never really meant for the purpose they are going to be used for. In this case, I started with a craft box like the one at the left. You can get these at hobby stores like Michaels - I found the ones I used at Costco where they were being sold in sets of five for something like $19.99. These ones are fourteen inches by fourteen inches and about two and three-quarters inches tall. They also have a flip top with latches and, most importantly, are stackable. 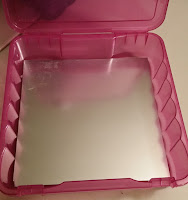 These craft boxes are the right size, but they don't have anything that a magnet will stick to. I went to Home Depot and found some twelve inch by twelve inch sheets of galvanized steel that cost about five bucks each. I have pretty much no real idea what they are actually used for (I think they might be used to protect siding when a fireplace is installed, or something similar, but that's just a guess), but as you can see in the picture to the right, they fit inside the craft boxes almost perfectly - the "fourteen inch by fourteen inch" measurement the craft boxes are advertised as having is the measurement of the top of the box and not how big they are on the inside. I used a generous application of white Gorilla Glue to stick the metal sheets to the inside of the craft box, and weighed the sheet down with some heavy books, so it would stick evenly. After letting the glue dry overnight, I had a stackable box that magnetic-based miniatures would stick to. 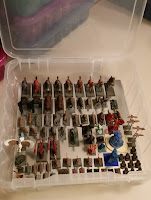 I ended up making seven of these boxes, which is enough to hold pretty much all of the "normal" miniatures I currently own. Since the boxes are stackable, I can just put them on top of one another to store the bulk of my miniatures in a relatively modest amount of space. Since the miniatures are on magnetic bases, they can also be transported in these boxes without the risk of damaging them. The picture to the left shows a completed box filled with some of my miniatures - the box is full of miniatures of animals, mythic animals, and elementals. Since each box only costs roughly nine dollars to make, I can just make more if my collection expands enough that I outgrow this set of boxes. The only minor drawback of this storage system is that any miniature that is taller than about two and half inches, which essentially includes any 25mm or 25mm mounted figure, won't fit comfortably in these boxes.

To store my "tall" miniatures, I had to come up with another solution. I tried to find a fourteen inch by fourteen inch container that was six or seven inches tall, but I couldn't locate one. Instead, I found a larger container that was sixteen inches by twenty-four inches and seven and a half inches deep at Target that cost about $7. Because these containers are measured from the top and not the bottom, a twelve inch by twenty-four inch sheet of galvanized steel wouldn't fit into the box. Instead, I took two twelve inch by twelve inch sheets and overlapped them in the container, gluing them down with white Gorilla Glue just like I did with the smaller containers. This was more expensive than the smaller miniature containers, partially because the box itself cost slightly more, and partially because I needed to use two sheets of galvanized steel instead of one, but the total expense to make it is still quite reasonable. This container won't stack with the smaller containers, but it is stackable with other containers of its own kind, so if I ever have enough "tall" miniatures that I need another container like this, I will be able to stack them for storage. Right now, I am able to fit all of my "tall" miniatures into the one box, so I'm good for now.