A Brief Overview of GURPS 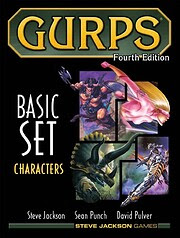 GURPS is the Generic Universal Role-Playing System, currently in its fourth edition. This page is intended as an overview of the system, although it is a decidedly incomplete guide.

GURPS is a skill-based system that uses a non-random point-based method for character generation. The fundamental game mechanic is "roll 3d6 and try to get a result under your skill". When making a skill check, a roll of 3 or 4 is always a success, and a roll of a 17 or 18 is always a failure. This is basically about 90% of the game system. The rest is pretty much details and tracking how each character's particular skills are determined.

Because GURPS is skill-based rather than level-based, characters don't level-up as they gain experience and wisdom. Instead, characters are usually rewarded with character points - the GM guidance recommends between 1 and 5 points per session, with an average of two or three per session. Points can be spent to improve abilities, buy some advantages, buy off disadvantages, improve skills, or gain wealth, at the player's option. Awarded points can be spent as they are handed out, or "saved" so the character can make a big point buy at a later date. Characters can instead be rewarded with gained advantages determined by the GM - such as gaining a new patron or ally, or obtaining military rank or social status.

Because it is a skill-based system, characters do not have character classes or other limitations. Almost any combination of attributes, advantages, disadvantages, and skills is possible, although there are some attributes that might be limited to certain races, or might be limited due to cultural or legal requirements. In extreme cases, very unusual characters may have to take the "Unusual Background" advantage at some point level as determined by the GM. Although there are no character classes, the rule books include a variety of "character templates" providing suggested distributions of points for certain character archetypes.

Characters have four basic attributes. The baseline for all four stats is 10, which is the starting value for a normal human character. Players can spend points to raise stats, or gain points by reducing stats. As a general rule of thumb, an attribute of 6 or lower would be considered a crippling disadvantage, and an attribute of 15 or higher would be considered amazing. The basic attributes are:

There are a few other derived attributes, mostly a character's height and weight, which are based on ST, but those don't affect gameplay much. These can be modified with advantages or disadvantages. In a science fiction game like Traveller, a character's home gravity can also matter, but that mostly affects how many points a character needs to put into ST to be "average".

Advantages are benefits a character can buy that are not either increases to their base abilities or skills. Advantages can cover an extraordinarily wide range of abilities, ranging from physical appearance, to social status, wealth, military rank, administrative rank, or even allies, contacts, or patrons as well as more esoteric benefits like Absolute Timing, Alternate Identities, or Danger Sense. Effectively, anything that has the potential to help a character out as they make their way through the world is classified as an advantage. Advantages all have an associated point cost, ranging from zero to as high as the benefit warrants.

There are a whole host of advantages - such as Brachiator or Constriction Attack - that are generally only available as racial advantages. In a science fiction setting, however, it is possible that bio-engineering or cybernetic enhancements could provide such enhancements. Within the Imperium, there is a social stigma against cybernetic implants or other body modifications made for purposes other than to replace but not augment missing body parts, and these are generally not commercially available. That said, most advanced societies within the Third Imperium have the capability to make such devices, and may do so covertly for a variety of reasons, most notably to enhance military or intelligence agency personnel.

Note that psionics exist in the Third Imperium setting, but require an Unusual Background and open use of such powers in many areas carries with it negative reaction modifiers from the social stigma against psionics in the Imperium.

It is possible, under certain circumstances, to acquire certain advantages during play. In those cases, the player would simply expend a number of accumulated points equal to the cost of the advantage and then add it to the character. Some advantages may require a character train to object them or (in extreme cases) undergo surgery or other body modifications. In some cases it is possible to acquire an advantage at a particular level and then later increase it. For example, the Ally advantage includes a frequency of appearance. If the player initially selected "quite rarely" for their Allies' frequency of appearance, they could later expend points and raise that to "fairly often", meaning the Ally would show up to help the character more often. As a good rule of thumb, a character who wishes to acquire a new advantage during play should consult with the GM first.

In general, disadvantages are things that give characters flavor and make them interesting. Perfect heroes get dull, and heroes that have flaws or limitations make for fun role-playing. Players should endeavor to play their disadvantages when they are applicable and not try to evade them. So, a character who has a Code of Honor against killing shouldn't try to figure out ways to kill his foes by accident, but rather should role-play that character's refusal to kill their foes. In extreme cases, it would be appropriate for a character to penalize a player who consistently refuses to play his character's disadvantages - either by limiting the rewards that character gets for adventuring, or by requiring the player "buy off" the disadvantage. by spending points.

Quirks are minor character notes that give one negative point. They are not intended to be as debilitating as regular disadvantages, but are rather little habits or traits that a character has that impact how the player role-plays a character. A quirk might be a very minor version of a regular disadvantage - for example someone might have a quirk "never kills insects" which would be a minor version of the pacifism disadvantage. There are a variety of quirks suggested in the GURPS rulebooks, but the list of possible quirks is by no means limited to those. Almost anything that is a specific behavior, dislike, like, preference, or other attribute of a character that will affect how the player plays the character could count as a quirk. Some quirks, such as Alcohol Intolerance, Dreamer, or Nervous Stomach, can have mechanical game effects, but they are minor and likely come up only infrequently.

Just like disadvantages, quirks can be "bought off" by spending accumulated points to do so, although it is often recommended that players don't do this, because quirks are often a large part of what give characters their individual personalities.

Skills are things a character knows how to do. Basically, almost any kind of action a character could take that could be trained is represented by a skill. Skills are all connected to one of the four basic attributes, and a character's aptitude for that skill is heavily affected by their relevant ability score. This means that a character who has a high DX will be better at a DX-based skill than a character with a low DX, even if they both spend the same number of points on that skill.

One important concept in GURPS is "defaults". Many skills have defaults, which is what a character rolls against when they try to use a skill they have not studied. For example, a character with a DX of 10 who has no points invested in the Acrobatics skill can still attempt to make an Acrobatics roll at the default value, which is DX-6, or 4, meaning they would have to roll a 4 or lower on 3d6. Some skills have multiple defaults, such as the Interrogation skill, which defaults to IQ-5, Intimidation=5, or Psychology-4. In the event a character is trying to use a skill with multiple defaults, they use the best default value. Some skills have no defaults, such a Karate. For skills with no defaults, a character cannot use the skill unless they have spent points studying it.

Some skills have prerequisites. Basically, this means that the character must have the prerequisite - usually a particular ability with another skill, but sometimes a particular advantage - in order to put points into that skill. For example, the skill Physics requires that a character spend points in Mathematics (Applied) at TL5+ first. In short, you cannot learn Physics unless you learn Applied Mathematics first.

Some IQ-based skills are defined as being for a particular tech level. So, for example, a character spending points on the Mechanic skill would need to define what tech level their skill applied to. The default is that it applies to the tech level the character is native to or in which they trained the skill. So, for example a character from the modern day (TL8) who trained in the Mechanic skill would be capable of using that skill with no penalty on a car from TL8. If they were called upon to make repairs to a car from World War II (TL7), they would suffer a -1 penalty to their mechanic skill when doing so. If they tried to work on a car from a TL9 society, they would suffer a -5 penalty. Greater variations between a the tech level a character learned a skill at and the subject of the skill, the greater the penalty.

Finally, some skills permit or require specialization. In these cases, the skill represents a range of endeavors, and the character may (and in some times must) choose a specialty within that skills. For example, the Driving skill has several specialties that a character must specialize in including Automobile, Construction Equipment, Hovercraft, and Motorcycle (among others). Basically, this sort of thing reflects the fact that the ability to drive a car doesn't really translate very well to being able to drive a bulldozer. Note that a character can put points into skills with specialties multiple times and learn multiple specializations. So a character might put points into Driving (Automobile) and also put points into Driving (Tracked), giving him the ability to drive both.

Skills can be raised (or learned) after character creation by spending the appropriate number of points required to raise them.

Email ThisBlogThis!Share to TwitterShare to FacebookShare to Pinterest
Labels: GURPS