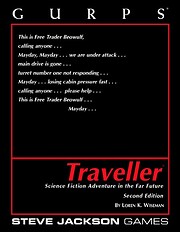 Very little is known about the race known to those within the Imperium only as the "Ancients", the "First", the "Forerunners", or the "Precursors". In fact, nothing of consequence is known about the race itself, as they left no known depictions of themselves, precious little in the way of written records, and a scant handful of artifacts scattered across hundreds of planets. Most of what is known has been gleaned from archaeological evidence found from a handful of surviving sites which are mostly subject to restricted access rules and open only to selected researchers. The remainder of what is "known" about the Ancients is conjecture and educated guesses extrapolating from the scanty actual information. The discovery of an Ancient site has been, on occasion, sufficient to place an entire world under Interdiction.

It is generally accepted that the Ancients first appeared as a spacefaring interstellar civilization between 400,000 and 300,000 years ago. The handful of surviving artifacts they left behind show them to be highly technologically advanced, surpassing current technological capabilities in many areas. Scholars believe that for reasons that are currently unknown, the Ancients took samples of early hominids and seeded them on planets throughout the Orion Arm, and possibly beyond. To date, the Imperium has found more than four dozen existing strains Humaniti, and archaeological evidence has been uncovered of at least a dozen more that died out prior to being contacted by any spacefaring race. Currently, general consensus is that the actual original home world of humaniti was Terra, a fact that the Solomani Confederation plays up in its propaganda as a means of promoting their claim to supremacy among human civilizations.

The Ancients also, once again for reasons unknown, are believed to have taken early canines from Terra and genetically modified them into the Vargr after seeding them on the planet now known as Lair. Genetic testing has confirmed that wolves and Vargr share a common ancestor, demonstrating this link. Why the Ancients chose to transport and modify canines and hominids and not any other species from Terra is a mystery. Why the Ancients chose to only transplant species from Terra is also a mystery. Some scholars have noted that just because humaniti and canines are the only two transplanted species that have been found by the civilizations in known space does not necessarily mean that there are not others, only that no one has found them.

It is sometimes difficult to determine what evidence shows the Ancients actually did as opposed to what they are credited with doing. Almost any unusual structure or odd circumstance will be attributed to the Ancients in some circles, whether there is actual evidence supporting this conclusion or not. The multi-world rosette in Tireen is generally acknowledged as the work of the ancients due to the discovery of Ancient artifacts on some of those worlds, but several other odd configurations of planets have been attributed to the Ancients with substantially less than convincing evidence. Similarly, any sophont or other form of life that has an unusual or unexplained attribute will find someone championing the notion that the Ancients are responsible for that attribute.

At some point between 200,000 and 300,000 years ago, evidence suggests that the Ancients became involved in a war that lasted for several millennia. Whether the Ancients were fighting an as-yet unidentified second race or fell to fighting against one another is not known. What is known is that the Ancients were completely wiped out as a consequence of this war. Many scholars have conjectured that the war reshaped entire world, indeed, many existing asteroid belts throughout known space are believed to be the result of world-shattering weaponry used in this conflict. There is an entire cottage industry producing books theorizing that one or another planetary myth or legend is actually based upon some example of Ancient military technology. In some cases, this supposition is probably correct. The proposition that legends of vast, implacable, violent gods found in Vilani mythology are in fact the stories of Ancient warbots running long after their masters had disappeared has been buttressed by the discovery of several large pieces of Ancient machinery on Vland. Indeed, some scholars speculate that deconstructing Ancient technology helped the Vilani develop Jump drive technology as early as they did.

Despite more than ten thousand years of exploration and study, the Ancients remain almost as much of a mystery as they were when the Vilani first left Vland in sublight ships. Actual information about them is scant, leading to an annoyingly incomplete record of their existence that is coupled with speculation run rampant. Though their actions seem to have reached across the millennia to shape modern interstellar civilization, the Ancients remain a nigh-impenetrable enigma.