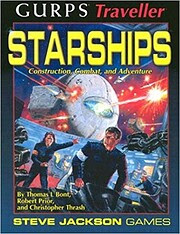 In the Imperium, a "starship" is a spacecraft that is equipped with a Jump Drive. A spacefaring craft that is not equipped with a Jump Drive is simply a spaceship, a ship, or a small craft. Spacecraft are rated in "dtons", which stands for "displacement tons", meaning the volume displaced by one ton of liquid hydrogen. A ship must be at least 100 dtons in size to accommodate the power plant, drives, and fuel required to be jump-capable. The term "small craft" is usually reserved for spacefaring craft that are smaller than 100 dtons in size. Ships that travel between stars via slower than light methods such as, sleeper ships or generation ships, are not classified as "starships", but are merely "spaceships". While cruisers, battleships, and dreadnoughts displacing 50,000, 100,000, and even 500,000 dtons are in service, most characters will deal with much smaller ships such as the 100 dton Suleiman-class scout/courier, the 200 dton Beowulf-class free trader, the 200 dton Empress Marava-class far trader, or the Animal-class 200 dton safari ship.

Every starship requires someone with the Pilot [Starship] skill and the Astrogation skill if it wants to successfully use its Jump Drive. Spaceships should have a crewman with the Electronics Operation [Sensors] skill and a crewman with the Electronics Operation [Communications] skill. Although not absolutely necessary, a crewman with the Computer Operations skill is highly recommended. If a ship is equipped with defensive screens such as black globe generators or meson screens, then a crew member should have the Electronics Operation [Force Field] skill. Most ships that player characters have access to are not large enough to have defensive screens. Ships that expect to go into combat usually have a commanding officer with the Leadership and Tactics skills. Note that having a commanding officer with Leadership can give crew members bonuses (and help them avoid penalties) to their skill rolls by coordinating their actions through orders (via a Leadership skill check).

Given that starships are regularly completely cut off from the outside world for week long periods, having crewmen who can perform maintenance and repairs on the various systems on a ship is recommended. A character with the Computer Programming skill and a character with the Electrician, Electronics Repair, or Engineering [Electronics] skill (or some combination of the three) is advisable.

A starship should have at least one crewman with the Engineering [Starship] skill as well as crewmen with the Mechanic [J-Drive], Mechanic [M-Drive], and Mechanic [Power Reactor] skills. For starships, a crewman with the Mechanic [J-Drive] skill is critical if the ship intends to try to enter jump-space at any point. Having crewmen with the more specialized Engineer [J-Drive], Engineer [M-Drive], and Engineer [Power Reactor] skills is optimal, especially if the ship intends to be in service for long periods of time. As with the bridge crew, having crewmen who can perform routine maintenance and repairs on the ship is recommended. Having a crew member with the Machinist skill allows for the creation of replacement parts while in flight.

Armed ships should have a crew member with the Gunner [Laser] or Gunner [Missile] skill, or both for every turret carried by the ship. Larger ships that have weapon bays or spine mounted guns have larger weapon crew requirements, but most of those ships are so large that he chance one will ever come under the control of a player character is remote.

As noted before, most starships can expect to be regularly out of communication with the rest of the universe for periods of at least a week at a time. Starships that journey into unknown or hostile areas can expect to be isolated from assistance for longer periods. Consequently, most starships carry at least some medical crew. Crew members with the skills Diagnosis, Physician, and Surgery are generally considered to be an integral part of a ship's crew. Ships that carry passengers always have medical personnel. Within the Imperium, ships that carry low-berths are required to have trained medical personnel as part of their complement.

Jump is a means of travelling faster than light by way of entering jump-space. Jump is also the only means of faster than light travel in the Traveller setting. Ships in jump-space are isolated and may not communicate with or be detected by anything in normal space. A ship in jump-space may also not communicate with or be detected by anything else in jumps-space. Jump drives are rated from Jump-1 to Jump-6, which measures the maximum range in parsecs the drive can convey a ship in a single jump. A starship can make a jump equal to or less than its maximum jump range, but normally only in even parsec units - the only exceptions are mishaps or micro-jumps. No matter how far a starship travels, a jump takes roughly a week (specifically 168 hours plus or minus 0% to 10%). Powering a jump requires liquid hydrogen which both powers the creation of the "hole" into jump-space, serves as coolant for the Jump Drive, and provides the jump "bubble" that separates the ship from jump-space while it is in transit. Every jump requires 10% of the ships tonnage in fuel per parsec traveled - even though every jump takes roughly the same amount of time, longer jumps consume substantially more fuel than shorter jumps. A micro-jump counts as 1 parsec for the purpose of fuel consumption.

A successful jump requires three skill rolls: A Pilot [Starship] roll, an Astrogation roll, and a Mechanic [J-Drive] roll. If any of these rolls fails, then something will go awry in the course of the jump. A critical failure on any of these rolls can be disastrous. Flying a ship using unrefined fuel imposes a -2 penalty on all of these skill checks. The potential results of a failed check are:

Note that while a ship cannot be detected or communicated with while in jump-space, it can be detected while entering and exiting jump-space using starship sensors. A series of successful Electronics Operation [Sensors] rolls can detect a ship entering jump-space and determine the approximate size of the ship, the time it left the system, and the direction of the jump, although there is no way to determine the distance of the jump. A similar series of Electronics Operation [Sensors] skill checks can detect a ship leaving jump-space as well as the approximate size of the ship, the distance it traveled in jump-space, and the time it entered the system.

When starships emerge from jump-space, they retain the same vector they had when they entered jump-space. As stars (and everything else) are also moving through galactic space, this vector is also imparted to a jumping ship. This means that a ship can choose to try to take advantage of this fact by coordinating its velocity and direction when it enters jump-space with its hoped for speed and direction when it exist jump-space. This results in different types of jumps as follows:

Matter in normal space interferes with ships in jump-space. If a ship in jump-space passes within a 100-diameter sphere of an object of more than 1 mile in diameter, the ship is usually "precipitated out" of jump space into normal space. This tendency tends to protect ships from exiting jump-space within another object. The primary job of a ship's Astrogator is plotting a course that avoids such objects to prevent exiting jump-space early. It is possible to enter jump-space within the 100-diameter limit, although it makes a successful jump more difficult. Attempting to jump from within the 100-diameter limit imposes a -4 penalty on all three of the required jump-related skill checks. Attempting to jump within 50 diameters of an object imposes an additional -4 penalty on all such skill checks, while attempting to jump while within 10 diameters imposes a further -4 penalty to jump-related skill checks. These penalties are cumulative, so attempting a make a jump from within 10 diameters of an object using unrefined fuel requires all checks to be made at a -14 penalty.

Any failure of one of the three required skill checks while attempting a jump from within the 100-diameter limit results in a misjump, with potential effects identical to a normal failure of the Mechanic [J-Drive] skill roll. Many of the most dramatic known misjumps are the result of crews attempting to jump from deep within the 100-diameter limit.

Space combat in Traveller takes place on a two-dimensional hex map. Once again, this is an abstraction made for game-play reasons. One could construct a means of conducting combat in three dimensions, but that would be more time consuming than practical. Each hex in space combat is approximately 10,000 miles across. For reference, this means that the Earth and the Moon would be 24 hexes apart. Earth is about 0.8 hexes in diameter, and the Moon would be 0.2 hexes in diameter. On this scale, a light-second is about eighteen hexes.

Combat takes place in 20 minute turns, with each turn comprised of seven phases. Each ship is represented by two counters: One showing its current location, and one showing where it will be next round (its "vector counter"). Note that action in these phases is more or less simultaneous. All ships make detection rolls, then all ships engage in maneuvers, and so on. The seven phases are:

Small vessels often have a single crewman occupying multiple roles on a ship. If a crew member fills multiple roles during a space combat, he suffers -2 penalty to all skill checks for each extra task he is performing. Actions counted as a single task for purposes of space combat are: Piloting, firing a single weapon or set of linked weapons at a single target, controlling a missile or salvo of missiles, acting as a sensor operator, damage control, engaging in complex communications such as coordinating a squadron or tracking a signal, or operating a meson screen. For ships attempting to enter jump-space while in combat, Astrogation is counted as another task. If a ship has two or more crew members engaged in multiple tasks, it should have a commanding officer who does nothing but give orders who can make a Leadership roll; otherwise the crew will suffer an additional -1 to their skill checks.